“He doesn’t mean to hurt”: the impact on families of violent behaviour from autistic children.

Another great programme from the BBC this week, available until November 28th. Victoria Derbyshire looked at the violence experienced by families of severely autistic children, and the difficulties for parents in obtaining support. (You can also read some of the stories here) 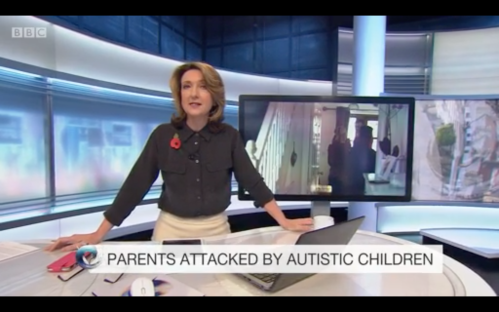 As well as introductions, and emails and texts from parents throughout the programme, there are two main sections to the item: a film from Noel Phillips (from 16.40 – 33.40), and interviews and discussion with three families and an MP (from 1.20.10 to 1.31.30). The programme ends with further calls from three families affected at 1.50.24. Some commentary is offered from the National Autistic Society, and the Local Government Association. You can view the whole of Noel Phillips’ film here.

There are said to be about 700,000 young people on the autistic spectrum in the UK. While not all will show violent behaviour, for the families of those who do, finding understanding and compassion, let alone support seems to be an impossible struggle on many occasions. For those familiar with issues around child to parent violence, there was much resonance with the experiences of these families: children who move very quickly from being passive to escalating into direct violence to themselves or others – for minutes or even hours; physical injuries, being pushed downstairs, strangulation and self harm, damage to property, concern for the safety and welfare of siblings; and tragically too, the judgement from parents at the school gate, the presumption of blame on the parents, minimisation by professionals, and the increasing isolation of families as a result. “We don’t leave the house unless absolutely necessary because of the dangers from my son”, says one caller to the programme. Sadly too we hear of guilt, despair, and even thoughts of suicide by parents.

I have blogged in the past about the differences between the behaviour exhibited by these children who also have severe learning disabilities, and what we are otherwise learning to call child to parent violence, but there is indeed an overlap for many families where the violence and abuse comes from a mixture of trauma, autism spectrum disorders,  and neurological damage. With a clear lack of intent for these children – which is raised in the programme – Yvonne Newbold chooses to describe it as Violent Challenging Behaviour, rather than child to parent violence. These are children reacting from a place of extreme anxiety and stress.

Josephine Larcher, one of the parents who called the programme, talked about how this sort of experience is “outside of most people’s understanding”. This does seem to be crucial to unpicking why we see such a poor response. Without direct experience of living with a severely autistic child day by day, people fall back on their own experiences of children’s behaviour in making assessments. This can lead to families being told they don’t need additional support to that of any three year old, or an assumption that repeated requests for help mean that you are not coping and therefore your children need to be accommodated elsewhere. The lived reality shown is of failure by local authorities to understand needs, or to intervene early to prevent a situation worsening  – “the parents of autistic children are not being properly supported in dealing with their violent behaviour”, which leaves families experiencing high levels of stress and anxiety themselves, with ” a severe injury waiting to happen”, and in one case severely out of pocket, as a parent spoke of paying £30,000 a year to privately fund a recognised therapy (ABA) that would not otherwise be available.

Are these criticisms fair? Asked to comment, the LGA points to the budget cuts inflicted by central government which has led to families falling through the net. Labour MP, Paul Williams, who appeared in the studio, said that he went in to politics himself because he felt powerless at the lack of resources available to professionals and saw this as a way to make a difference. He spoke about the help he believed was necessary as an answer for families. But while its easy, and probably reasonable to pass the responsibility up the chain in this way, there are some things that are easy to fix when you hear about them: lack of compassion from front line professionals, the judgementalism and failure to comprehend what it is that parents are asking for or experiencing. Many, many professionals do act with great understanding and empathy. It is in the nature of programmes such as this that we do not hear the positive stories. But that so many families, as we heard today, are left to struggle, is a testament that we have not got this anywhere near right.

I have tried to summarise what parents were asking for – those on the sofa, those who gave witness in the film, and those who called in:

This is indeed a hidden issue still within our society, but it is one which is finally getting the attention it needs, and to which we can only hope to see a more positive response in future – if not in terms of resources, then at the very least from the professionals whose awareness and understanding has been raised by programmes such as this.

One response to ““He doesn’t mean to hurt”: the impact on families of violent behaviour from autistic children.”