I spent last Friday at the NVR UK 2017 conference in London, where it was great to catch up with colleagues and people I had previously only known through twitter, to make new friends, and to learn how the practice of Non Violent Resistance (NVR) can be applied to all areas of life.

There were two keynote speeches, followed by a series of workshops; and one I was particularly interested in was about the establishment of parent groups connected with de Wiekslag, an organisation in Belgium working with high risk young people and their families. These groups are for parents of young people exhibiting very serious challenging behaviour (including violence to parents), or engaging in school refusal, self harm or running away, and they are described as “slow open groups”, with no course beginning or end, and parents can attend for as long as they like, or need – typically 9 to 12 months. When they leave, a place becomes available for another family.

Within a short time of beginning the workshop, the presenter, Ivan Nulens, was bombarded by a series of questions around the different expectations deriving from work in a different administrative and cultural context. So, only one single criteria: parents are prepared to try something different. And no before-and-after questionnaires, measurement or evaluation, other than parental testimony. The Flemish government requires a very different set of evidence to justify handing over the money. What a refreshing environment to work in we were all thinking – and then the bombshell: NO CAKE! 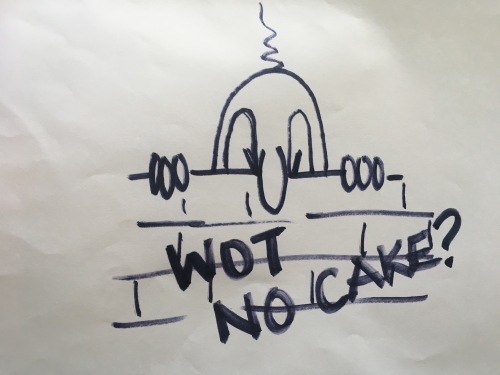 No – this is all about work, and hard work at that. Each session lasts two hours and the process is very intense. It is a serious business and the offering of food would be seen as trivialising the issue. This is making a statement. “A different way of doing things”.

Fortunate then that, as one participant reassured us, NVR is flexible enough to cope with difference in how things are run! Just as forceful as Ivan’s commitment to ‘NO cake’ was the response from those used to working in a different cultural environment, who felt that biscuits and refreshments were an essential part of caring for group members, an important nurturing and regulating element: “We get through tons of biscuits when there is a lot of emotional work going on.”

What is the lesson from this? I guess it showed me the dangers of adopting any one model of work from a different country –  or organisation even – without thinking everything through; how easy it is to get hung up on the “right” way of doing things, without separating the essentials of an activity (the NVR principles in this case) from the peripheral add-ons and the cultural context. Both approaches seem to be working very well, with positive feedback from both facilitators and parents. But woe betide anyone who tries run a group in Britain without tea and biscuits!