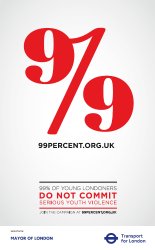 This poster has been on display until recently at my local underground station. We may quibble with the statistic, but it’s helpful to remember sometimes that the majority of young people do not offend in any way, in view of some the news items (here and here) that I have picked up over the last couple of weeks following the launch of a book by Dr. Aric Sigman. (The Spoilt Generation: Standing Up to Our Demanding Children, 2011, Piatkus Books)

I will confess straight away that I have not read Dr. Aric Sigman’s book, and I have not previously come across his name. A quick google search tells me that he has written extensively across British newspapers in his field of psychology and biology. He has featured in investigative documentary TV programmes and speaks as an expert at conferences. However, Ben Goldacre, author of Bad Science, has argued vociferously in the past that Dr. Sigman cherry picks his evidence and statistics to suit his argument.

Dr. Sigman appears to have an effective and efficient press agent. The launch this month of his latest book in the series, The Spoilt Generation, has received coverage across the world and over a diverse selection of media. A relevant slant has been found to discuss preschool children: “Spoiled toddlers are using violence to get their own way”, and the growth of violence in UK schools: “The punch in the face that taught me giving pupils rights is turning schools into war zones”, as well, of course, as adolescent violence in the home.

He seems to lay the blame for all of this at the foot of parents who spoil their children from the start and exert minimal authority within the home. The “me generation” allegedly has its roots in the children’s rights movement, which promoted the rights of children over those of their parents.

All these themes have long been explored and addressed within the mainstream research literature, which has moved away from a parent-blaming culture to understand the multiple factors at play in families where parent abuse takes place. This is not to deny that there are disorganized and dysfunctional families where authority, respect and normal behaviour have been turned on their heads; but this is only a small part of the story. Eddie Gallagher, Barbara Cottrell, and Jo Howard and Naomi Rottem have all separately addressed this well in their writing.

It is always worth reading the comments attached to these press articles and blogs. Sadly, the overwhelming response in this case has been to heap opprobrium on the parents, though responsibility for the decline in behaviour is considered to be shared by them with the government for having spoken out against (“banned”) corporal punishment, effectively rendering parents helpless. A few brave souls give a more balanced, thoughtful and occasionally personal viewpoint.

It is to be regretted that such an important issue received such one-sided coverage, further influencing a culture of parent blaming, at a time when researchers and practitioners are working hard to address the issue more positively.

Tagged as adolescent violence in the home, Parent abuse